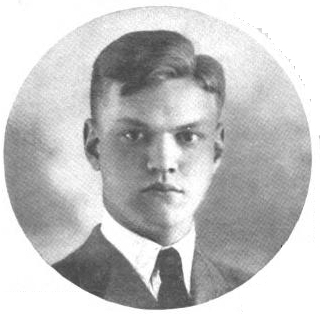 From a 1922 issue of The American Magazine:

Back in 1911, nine-year-old Kenneth Hill’s gang in Beloit, Wisconsin, poked fun at him because he seemed unable to walk on 24-inch stilts like the rest of the boys. To-day, at nineteen, he is helping himself through college by ambling around the United States on the tallest pair of stilts in captivity.

Ducking trolley wires and eating dinners in the air beside second-story restaurants has its thrills and dangers, but it pays ten dollars a day and expenses, by reason of Hill’s effectiveness as an advertising medium; and there’s enough left at the end of each summer’s unique work to carry him far into the college year.

When he was thirteen he built, in the Beloit manual training high school, a pair of wooden “legs” twelve feet high — the very pair that is’now helping him through college — and conceived the idea of walking on them for advertising purposes. His father, a substantial lumber dealer and Rotarian, gave him his first job at two dollars a day walking around at the Beloit fair in a tremendously long white duck suit with signs painted on it.

The stunt was a success. After that came a variety of offers for young Kenneth’s services. They ranged from the sublime to the ridiculous. Some of them were accepted from time to time.

Since then Kenneth has led parades. He has straddled race tracks while motorcycles sped madly between his legs. He has not only eaten second-story meals, but he has been shaved, had his hair cut, his teeth fixed, and hats tried on at the same elevation. He has played the bass drum in clown bands. He has figured in movies. He has carried all manner of advertising.

His father has confidence in the son’s ability to go forth on his stilts and take care of himself. So that is exactly what the son is doing, though he might spend his summers as many other boys do and receive checks from home during his winters at college if he chose.

“He knows that if I knew he would send me money every time I go broke, I’d quit and holler for help whenever the going gets rough,” laughs this husky, steady-eyed youth. “But he knows I know I’ve got to stand on my own legs, and it’s been a good thing for me. I’m convinced that if a man really uses his head and whatever powers he may have been endowed with there’s always a way out when things get black.

“To show you how it works: One day I lit in a town at a moment when I had thirty-nine cents, my ‘legs,’ and no job. I could just barely eat a noon meal, and then I was broke. I grinned at a sign painter, told him my story, and assured him I’d have money before dark. He staked me to a white card bearing the words, ‘I want a job.’ With this on my back, I got on my ‘legs’ and began walking the streets. Inside of an hour I was advertising a show for a theatre, and that night I had ten dollars and a contract for three days — thirty dollars and expenses. Oh, I believe in a man advertising what he can do, all right, if he can do something well.”

Youthful years on stilts have given him dexterity, balance, strong arches — and nerve such as few men possess. Hill knows of only three others in the country who are stilt walkers — and none of them use “legs” the height of his tallest pair. That particular pair keeps his head 22 feet above the ground, while his everyday ones support him at 18 feet. Trolley wires in most cities hang at 16 feet, and on the taller pair, he would be unable to duck under these ever-present obstructions.

“O-o-o! What if he should fall!” is the commonest exclamation wafted up to Hill’s ears from crowds the country over.

“If the lighting wasn’t good, I’d probably bust up in business; that’s the only logical answer,” laughs Hill. “Though there is an art to stilt falling, just as there is to stilt walking. If a man fell straight forward, describing the full arc, and lit on his knees with his body bent back, the fall would be harmless enough.”

But if the fall were crooked! Hill has had that kind, too. A knee was shattered in such a fall. It is none too reliable now; but if he is careful where he steps, he feels he is safer than the man whose soles are flat on the sidewalk.

“Nobody can run into me, claiming he didn’t see me,” comments Hill. “I’m the most ‘seeable’ thing in sight, with my Uncle Sam suit of clothes on, no matter where I happen to be. Sidewalk crowds invariably part wide for my legs.” Street traffic halts for me. I don’t care how jammed a place may be, there is always a clear path for me to tread, while men probably a lot more important than I, are down there getting shoved and trampled and delayed.

“It seems as though everybody is ‘for’ me. Very few ever have tried to make trouble — though they could, easily enough. Men seem to be thinking, ‘What if I were up there in that fellow’s place.’ And that makes them considerate. Kids are either too scared or too loyal to me. And women are usually too astonished and awed.

“Slippery spots and wind are my worst enemies. You’ve no idea how many different gusts and eddies of wind there sometimes are between my head and the sidewalk. If you were in my place, you might think somebody had hold of your sticks.

“These same sticks are playing a pretty tall part in my life, giving me self-confidence and a little business experience which ought to help me in after years. And walking ‘way up here over people’s heads while everybody invariably steps aside for me, gives me a sort of buoyancy of spirit that doesn’t leave me when I’m down.”

Perhaps the habit of being head and shoulders above the crowd is going to remain with Kenneth Hill long after he has ceased leaning his great sticks against a building, sitting in a second-story window to strap them on, and walking off on them to the amazement of thousands. Who knows?

This site uses Akismet to reduce spam. Learn how your comment data is processed.